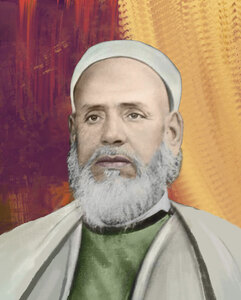 Muhammad ibn-Khalifa al-Madani was born in the city of Ksibet al-Mediouni in 1888, in a noble family

His father Khalifa was a merchant, he was different from others and had a good temper. He has a cart in which he transported his harvest olive’s oil to Tunis where he could sell it and return to the village with substantial benefits. Since he was a pious man soonly becomes the first followers of the Sheikh as-Sadiq as-Sahrawi, muqaddam of the brotherhood Madaniyya Shadhiliyya in Tunisia. His spiritual teacher was sheikh Mohamed Zafir al-Madani.

When the son was born, he was named Muhammad al-Madani, and before 5 years old he joined the “Kùttab” to memorize the Quran.

He learned by hear 60 chapters of the book when he was only 12 years old. He was sent to Monastir city, where he attended the Quranic school courses and learned writing, reading, and how to calculate.

In 1901, he got back to hometown for starting up the religious sciences and the rules of syntax and Arabic grammar. He was taught by excellent teachers and in two years, the young Muhammad al-Madani becomes ready to join the courses of the big mosquet of Tunis city. At the age of fifteen years old he left the town which he grews up to join the Zaitouna university “… he was considerate as one of the best students in his class…”

In this period influence of the Sheikh Muhammad Abdùh was already significant in the academia, some of the scholars were against his reformist ideas, and others followed him. When Muhammad al-Madani was subscribed in the Zaitouna in 1903, there was an atmosphere of discord. During the second visit of sheikh Abdùh to Tunisia (the first was in 1884), quarrels caused violence between supporters and opponents of the grand imam of Egypt. The young student, who three years ago was disappointed by what he saw in Tunis when he visited for the first time “…you’d really never be able to recognize Muslims from Christians as they are alike in the clothes and the language…”

And now the people of knowledge, the observers of Islamic identity were fighting against each other, instead of uniting against the conquerors.

The Sheikh and his works

Among the distinguishable qualities of Sidi Mohamed Al-Madani